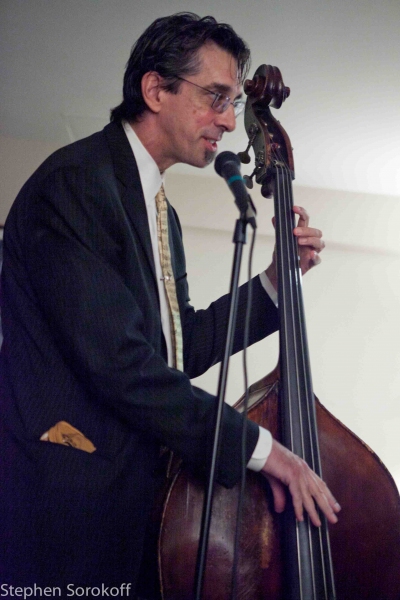 Ritt Henn plays bass, writes songs and lives in New York City. In 2005 he received both the prestigious Back Stage Bistro Award (for Outstanding Songwriter Instrumentalist) and a MAC Award (from the Manhattan Association of Clubs, for Best New York Debut-Male). He began playing the bass in the 5th grade when they were looking for a tall kid to play upright in the school orchestra. By high school, hip teachers were letting him write songs in lieu of taking tests. He began performing in coffeehouses; upon graduating from Bucknell University with a degree in music and psychology, he bought a white 3-piece suit and joined a lounge band.

While continuing to pay bills as a sideman—he’s worked with Buddy Rich, Chuck Berry, Tom Jones, whistled for Michael Jackson, and appeared in the Off-Broadway musical “Shockheaded Peter”—Ritt actively pursues his solo career, playing with an ensemble or often just his bass. His sound reflects his record collection at home: jazz with a dose of blues and old school R&B thrown in the mix. His songs touch on life, love and the pursuit of happiness, laced with a wit that sometimes simmers, sometimes boils. [Ed. note: Sorry, Phil got a little carried away there.] When appropriate, his live shows incorporate elements of storytelling and humor; and yes, sometimes he’s even been known to just shut up and play.

Ritt’s opened for Christine Lavin and Soupy Sales, and performed on the mainstage of the Pori Jazz Festival in Finland between Freddie Hubbard and Bela Fleck and the Flecktones. He’s toured extensively in the U.S. and Europe and received radio airplay worldwide, including a live performance on Levende Lijven on Radio 1 in Belgium. He’s been a winner in the Sierra Songwriters Festival, a finalist in the Independent Music Awards, and an honorable mention in the Napa Valley Songwriters Contest. His latest CD, Goin’ Back, features cats who’ve played with everyone from Ella Fitzgerald to Marvin Gaye to No Doubt.

In his spare time, Ritt’s produced nearly 200 episodes of ManBassBoxTV (a.k.a. A Man, a Bass & a Box of Stuff), his own public access series which puts the “real” back into “reality TV.” On the air in Los Angeles and New York since 1993, they’re 28 minute made-for-TV movies that focus on independent musical artists, including, sometimes, Mr. Henn himself.

Ritt has conducted workshops in conjunction with his instructional book, Chart Writing Made Easy,and clinics touting the wonders of the almighty Azola BugBass, the electric upright that he proudly endorses. He’s also an endorsee for B-Band, the folks who make his sonorous acoustic bass pick-up, and SWR, whose California Blonde amp has looked and sounded so sweet sitting there on the set of the TV show.

He’s portrayed an alien bassoonist on Star Trek: The Next Generation, won a Drama-Logue award for his portrayal of an inbred bass-playing gas station attendant in the Hollywood production of Pump Boys & Dinettes, thrilled thousands as the loveable, golden-voiced murderer Officer Bell in the world premiere of The People vs. Mona at the Pasadena Playhouse, and held thousands more in thrall while singing of his dirty socks in Jim’s Garage at the Flat Rock Playhouse in North Carolina (another world premiere, of course).

Yet it all pales in comparison to the thrill of laying down the bass line to “Stand By Me” with Ben E. King at a used auto parts convention in Las Vegas.