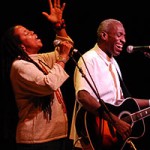 Kim and Reggie Harris are two vibrant, superbly talented and engaging performers whose captivating stage presence has inspired audiences around the world for over 25 years. As singers, songwriters, storytellers, educators, historical interpreters and cultural advocates, they have used their remarkable voices and their unique talents to bring new insights to the entertainment and educational spectrum.

Born in Philadelphia,  a city rich in musical and cultural heritage, Kim and Reggie were both exposed to a wide range of composers and musical genres. Their training, nurtured in their individual homes and enhanced in their churches and schools, enriched their musical vocabulary. It was the start of what has evolved into the ” Bach to Rock” musical approach (with the strongest elements being Folk, Gospel and Jazz) that is so prevalent in their music. They met, by chance, at a summer camp in 1974. While attending Temple University, they honed their performance skills in the clubs and coffeehouses around Philadelphia.

In 1980, Kim and Reggie “hit the road,” touring universities, art centers, schools and other concert venues. Their strong material (both original and otherwise) and complex harmonies, combined with their stunning voices and informed stage patter, has won them accolades and fans that has them in constant demand. They average over 275 performances each year!

They have been featured in performance at the Kennedy Center, The Smithsonian Institute, The International Children’s Festival in Canada,The Wang Center, The Pike’s Peak Center, various festivals in the United States, Canada and Italy and a host of universities, schools, churches and performing venues.

They have proven themselves to be exceptional people who can entertain audiences of all ages and backgrounds. They continue to distinguish themselves as artists of integrity who show respect for their craft and their audiences by working to expand their skills and build on their knowledge base.

Kim and Reggie are presenters in the John F. Kennedy Center for the Performing Arts Touring workshop program providing teacher training and arts events that encourage the use of the arts in the classroom.

They are featured artists in Silver Burdett and Ginn’s “World of Music”, a leading educational music series; they have, in collaboration with Chatham Hill Games, produced the “Underground Railroad Activity Set” (a video, game and teaching guide) for use by teachers and parents and they continue to be sought after presenters on the subjects of the Underground Railroad, the Modern Civil Rights Movement and African American Music of Social Change.

Over the course of their career they have opened for and performed with a diverse array of artists including Jay Leno, Pete Seeger, Richie Havens, Tom Paxton, Micheal Keaton, The Indigo Girls, Janis Ian, and many others.

Kim and Reggie have recorded 5 CDs on the Appleseed Recordings label, one CD for Folk Era; contributed tracks to each of Appleseed’s Pete Seeger releases and are also featured (with other leading Folk and Acoustic artists) on a growing number of compilation and tribute CDs.

Kim has most recently earned a Master of Divinity degree from Union Theological Seminary and, when not touring, Reggie coaches girls varsity basketball.