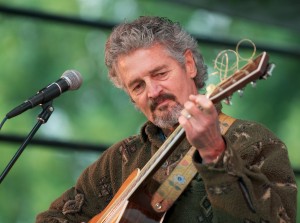 Alan Thornhill’s unpretentious nature could be misleading. You might think upon meeting him that he’s simply the modest legendary finish carpenter from the artist colony of Ojai, CA. That myth evaporates when he picks up a guitar and beautiful hands reveal what they were born to do. Long recognized as a notably brilliant player (winner of the prestigious Telluride Fingerstyle Guitar Championship), his distinctive sound has been featured on numerous recordings (Kate Wolfe, Chris Hillman, Hoyt Axton, The Rincon Ramblers). While his melodic playing captivates audiences of all ages, from concert halls to festival stages, it is simply a stunning accompaniment to what is called by many “one of the most beautiful voices ever heard.”

His place among the best was confirmed with the release of his solo album, Sittin’ Out the Rain, a spectacular showcase of Alan’s definitive songwriting, guitar playing, and vocal flair. The album, recorded in Nashville and produced by Pat Flynn (New Grass Revival) has quickly become a fan favorite and won the 2008 Mavric Music Awards’ Album of the Year.

Alan’s latest release is Guitarpenter’s Dream, an album of eleven original instrumental pieces. Recorded at home, this record has captured the warmth and melodies of his unique guitar style, as well as an occasional crackle of the fireplace, and the warmth of the 1928 stone house where it was recorded. Guitarpenters Dream was nominated for 2008 Mavric Music Awards Instrumental Album of the Year.