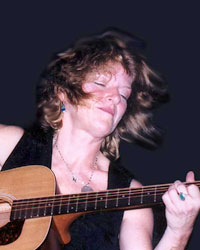 Caroline’s performances are known for emanating a high level of infectious energy and jaw dropping guitar playing. Her genre spans many style, from rock, blues, folk and country to southern roots. She is not only an accomplished singer/songwriter but also a respected musician that can cut it up on a 12-string guitar and woo the crowds with her piano ballads.

She has recorded and shared stages with The Indigo Girls and Bonnie Raitt (1985-2005) in venues such as San Antonio’s Majestic Theater, Denver’s Red Rocks, and Berkeley’s Greek Theater. Caroline’s performance history includes headlining at the Kerrville Folk Festival in Texas;  the Mendocino Music Festival and High Sierra Music Festivals in Texas; the Bumbershoot and Folk Life Festival in Seattle; the Falcon Ridge Folk Festival in New York and more.

In May 2006, she embarked on a 2-month European tour including an invitation to be the first woman guitarist to teach and perform at the famed Schörndorf Guitar Festival in Germany. She also plays in England, Wales, Germany, Belgium and Holland to sold-out crowds. She returned to the U.S. to headline at the prestigious Mendocino Music Festival to standing ovations, and headliner for the Kerrville Wine and Music Festival and ending the year at the Moab Music Festival in Utah.