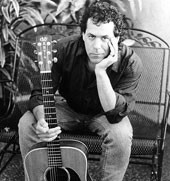 When Cliff Eberhardt released his debut album in 1990, many people discovered the musician that songwriters and acoustic music fans had raved about for years. His compatriots have long admired his work, with artists like Richie Havens, Shawn Colvin, Lucy Kaplansky, and Buffy St. Marie recording his songs.

Eberhardt has performed since age 15, when he hit the club circuit with his brother. He toured solo for over 10 years before he recorded his first CD, and played guitar with Richie Havens and Melanie.