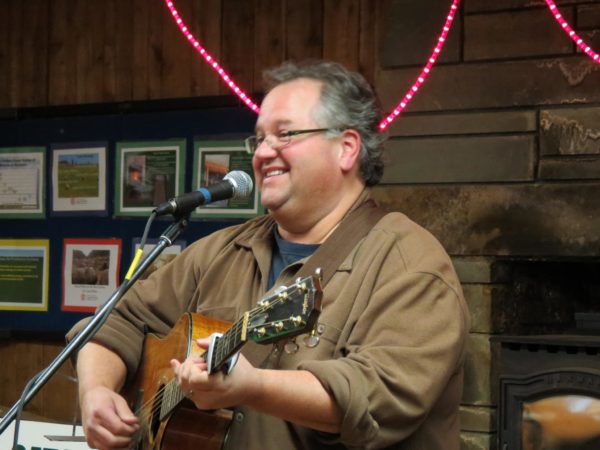 Vito Petroccitto Jr, another veteran of many Summer/Wintersongs and a guitar legend in New York’s Hudson Valley, brings twenty-five years of teaching experience and his unique blend of expertise and fun to camp.

Vito Petroccitto has strong roots in music. Fathered by a musical legend in his own right, Vito’s life has centered around music and entertaining since his beginning. Raised by a gigging dad, becoming a musician seemed a natural career choice; a road that he has proudly taken.

Currently, Vito still fronts the band Four Guys in Disguise on occasion (which he co-founded in 1989), a collection of talented musicians who are recognized in the Hudson Valley region as area’s finest.

Four Guys has opened for Eddie Money, The Doobie Brothers, Orleans, The Rascals, The Chris Barrons Band (Lead Vocalist/Spin Doctors), and Deep Banana Blackout, among others.

Vito’s versatility in entertainment includes radio and television. He has written and performed parodies in conjunction with FM 101.5 WPDH and on a solo basis for more than fifteen years, cracking up listeners in the tri-state area with his unique style. Vito is a talented storyteller, incorporating musical genius to create a perfect blend of lyric and melody. A fine example would include “The Yankee Song,” a musical tribute co-written by Vito and members of the WPDH morning show in advance of the Yanks 1998 championship season. Mark Cooper and Mike Colvin composed clever lyrics in combination with Vito’s musical vision, creating a song that sparked pride in Yankee fans of all ages and struck a chord with the players as well. “The Yankee Song” could be heard in the Yanks clubhouse, radio stations from Albany to Long Island, and everywhere in between. Its notoriety peaked the interest of Al Trautwig, of MSG Network as well as WFAN and WPLJ’s Scott and Todd in New York City. The song is alive and well and is often requested by Vito’s audience during his live performances everywhere.

The self-proclaimed “greatest guitar player in the world” has been making music for more than 25 years. His comedic antics and mind-blowing solos have created a one of a kind act that keeps audiences begging for more. Known for his feel-good approach to entertainment, he thrills lay people and professionals alike.

Vito’s expansive musical career has included Four Guys CDs featuring Johnny Philibuster, Live Tracks, I Am America, and his latest solo efforts The Blare Horse Project (featuring some of his finest parody work to date), and the “Yankee Song” single CD (released in 2004). He also contributed to a number of other projects including WPDH and WPYXs parody compilations, as well as session work for a number of talented artists. Vito recently appeared on David Roth’s Think Twice double CD, released his own first solo effort entitled En Vito Veritas, and also a 2007 CD with the Four Guys in Disguise band.

CLASSES OFFERED BY THIS INSTRUCTOR

“The Musician’s Palette” is much like a painter’s palette of colors, only our paint you can hear! The painter has colors to paint a picture we can see. They’re beautiful colors, some straight, others blended together to create gorgeous tones for our eyes. The musician has the same thing, only our colors are sounds like chords and scales! In this course I will show you the relationship between notes, chords, scales, keys, and how they all work in concert together to bring us beautiful pictures we can hear! Please join me in exploring the wonderful views of sound. Applies to instruments of all kinds! It also will help you develop your jamming skills and give you more tools for your songwriting toolbox. If you’ve ever been stuck using the same four chords over and over again, this information might give you a new boost to get out of that rut! What you could walk away with: A better understanding of theory; Knowledge of which chords go together in any given key; Vito’s “Page of Relations” (which is like throwing the circle of fifths at the wall and having all of its secrets become totally apparent; An understanding of the Nashville number system and then some. I’ve been teaching guitar for many years so I’m sure there will be something to gain here! Let’s get to painting!!

Never written a song before? Brimming with ideas that are all dressed up and no place to go? No ideas at all? Let’s roll up our sleeves together and start at the beginning. This all-levels class is geared especially towards those who are new to the craft but also to those who simply might like to strip down their own process a bit by looking through a different lens at this wondrous art form. We’ll write every day, brainstorm compelling individual themes worth writing about, examine the different elements that make a song, and engage in lively dialogue/exercises/demonstrations on topics like sculpting inspiration, developing universal truths from personal stories, tackling tough subject matter, and being honest.  We’ll also have fun in a safe, playful, supportive, permissive, and powerful environment and with any luck – and as time allows – we’ll get to hear some of these new creations during the week.