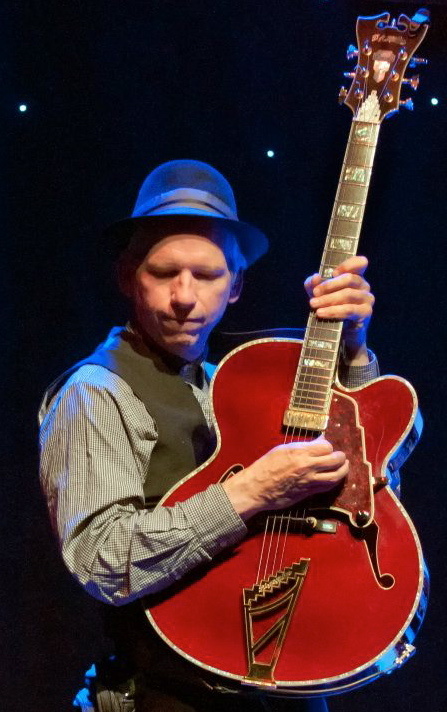 Pete has a lifetime of experience backing singer-songwriters on the road and in the studio. His early travels with Mary-Chapin Carpenter led to a steady gig as a member of Nanci Griffith’s Blue Moon Orchestra. He can be heard playing the opening guitar solo on Nanci’s Grammy-winning CD,”Other Voices, Other Rooms”, and his work with Nanci involved backing her numerous songwriter colleagues, including Emmylou Harris, John Prine, Guy Clark, and Townes Van Zandt as they would show up to collaborate with Nanci on a song or two. Each singer had their own artistic approach, and for Pete the challenge was always to “zone in” on that and play in a way that would frame their lyrics and bring out what they wanted to communicate to the listener. That education was invaluable when he joined forces with fellow Blue Moon orchestra alumnus Maura Boudreau and they became the married Kennedys. Each song on their dozen CDs started as a guitar arrangement, and that is how they are performed live. Pete is thankful to the many mentors who taught him to play with taste and imagination, and he looks forward to mentoring aspiring singer songwriters in developing their own guitar arrangements. This will be a “master class” format, which means that it will be driven by the students’ own performances. Play a song, and Pete will help you get the maximum depth and breadth from your guitar part.