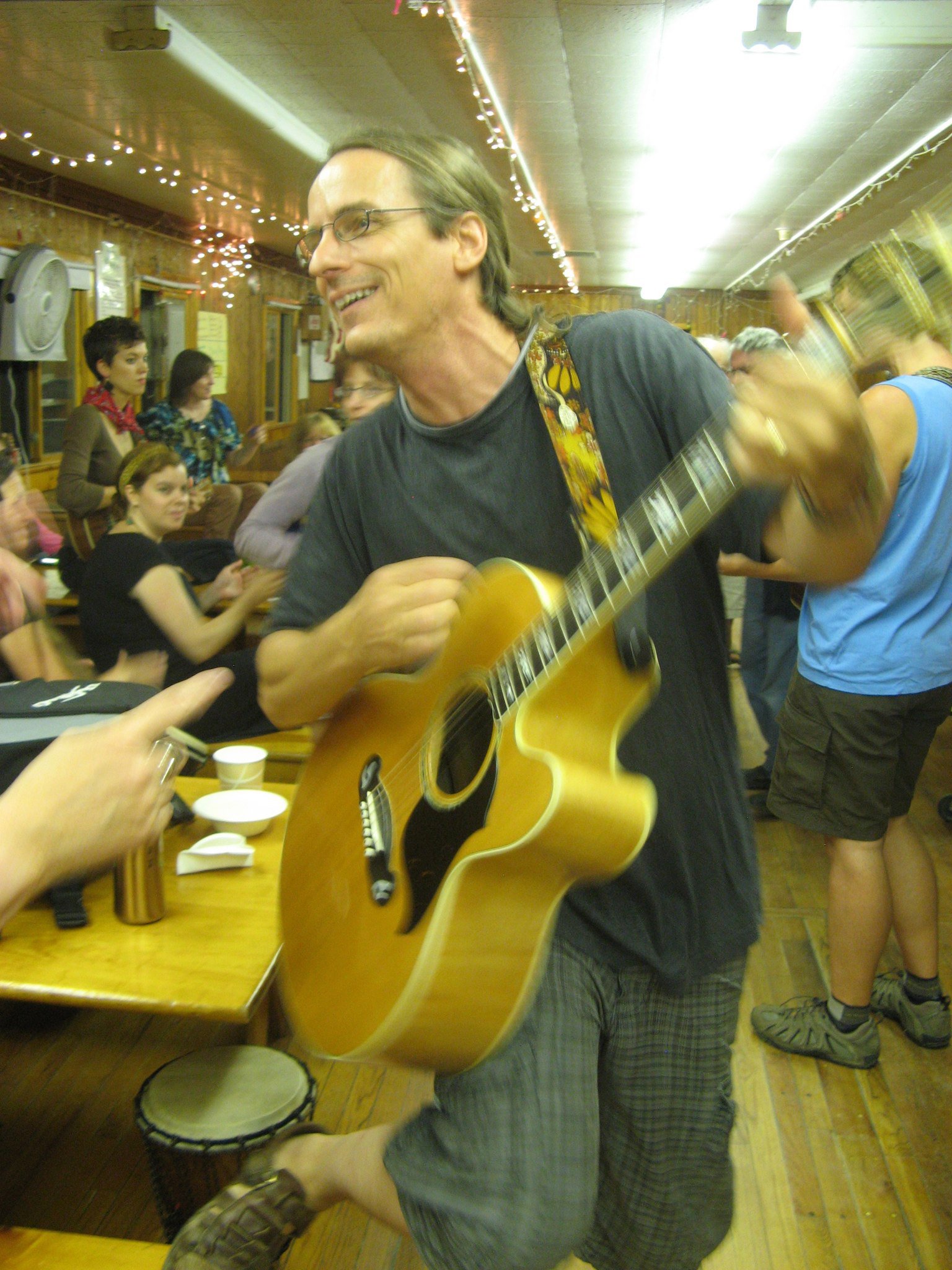 At SummerSongs, the uber-talented Glen Roethel has served as leader of all things “jam,” Beatles and otherwise — as well as a wonderful guitar teacher. But Glen began as a SummerSongs “camper” and has long-been on a songwriting, musical and spiritual journey of his own.

Glen teaches super-fun but superbly educational classes at SummerSongs that will help songwriters and music-makers of all levels learn to play in a band and as a group. Here’s what he had to say about his own SummerSongs experiences over the years and how attendees can get the most out of his classes this summer:

Q: Can you talk a bit about how you first came to SummerSongs?

Back in late 2003, I was finding my way out of corporate America and back into more musical surroundings.  I wanted to do it with better, intentional lyrics focused on healing and hope. So I searched and searched for community and a mentor – someone to guide me and help me shape my new career. I searched the internet tirelessly until I finally found a video of one man performing – by himself with acoustic guitar – at the Kennedy Center in Washington, D.C..

David Roth was a tall man, clearly at ease with his audience, brilliant in his magical turn-of-phrase, and everything he sang enriched the moment with a positive message – I had found my mentor!

Upon learning that I had just missed him in a concert near my home I quickly found his website, joined his mailing list, and sent him a note requesting a master class or any kind of tutoring that he might offer nearby. He responded immediately to my email, sending me a long list of music camps where he taught. Upon pressing him further he offered, “SummerSongs is very special.”

I signed up immediately! And that summer at my first camp I met SummerSongs founder Penny Nichols, Sue Riley (of emPower Music & Arts), Sloan Wainwright, my beloved friend John Redgate, and many more who are embedded in my life now. My life has changed forever, and now SummerSongs is a community that I call home.

Q: What do you love most about SummerSongs?

A:  I love SummerSongs because it is a healthy, nurturing environment where real work and learning take place. And, everyone grows into the songwriter, performer, teacher and person they want to be – that’s a fact!

Q: Let’s talk about your classes: You’re teaching “School Of Rock”! What is that about?

School Of Rock is a sandbox where we’ll all get to play with some new toys: riffs, hooks and rhythms from classic rock songs (primarily for guitar and beginning bass). Why? Because rock music has rhythm and musical hooks as their focal point. Adding movement within chords, grace notes, hooks, and bass lines – these are very common requests I’ve heard from campers and School Of Rock is a very fun way to achieve it.

Students will love it because they’ll enjoy playing these parts in a group, and stitching them together for a coffeehouse performance. Then, as an afterthought, they’ll realize that they’ve just expanded their musical and songwriting toolbox with well-rehearsed, tried-and-true multi-million-record-selling musical parts!

Q: How about your other class — “Guitarchestra?” What’s that like?

My other class, Guitarchestra offers a similar advantage but can fit any instrument and any player at any skill level. I feel crazy just saying that, but it’s true. In this class we learn to be playful – to leap safely without a net, and discover new options; we learn to squeeze every ounce of possibility out of simple musical parts; we pay attention INTENSELY; we sing stomp strum bang “ahhh” laugh harmonize conduct and follow; we compose new arrangements on-the-fly. And all the while we each push our own learning edge forward just a little.

Q: What are the biggest challenges of learning to play together as a group? Why is that important?

If you’re a songwriter who has never played in a group,  it might take you some time to shift your approach away from “me, my song and I” to “there’s someone else doing this with me.” But it’s a beautiful progression. Once you have locked in with other players and no longer trip over each other’s parts, you will begin moving toward musical mecca – feeding off of each other’s performance! This level – which encompasses improvisation and musical detours – is the most exciting reward of playing well together in a duo, band, or ensemble.

Q: Finally, you are known as the leader of the SummerSongs jam, especially the Beatles jam! What’s the thing you love most about that? 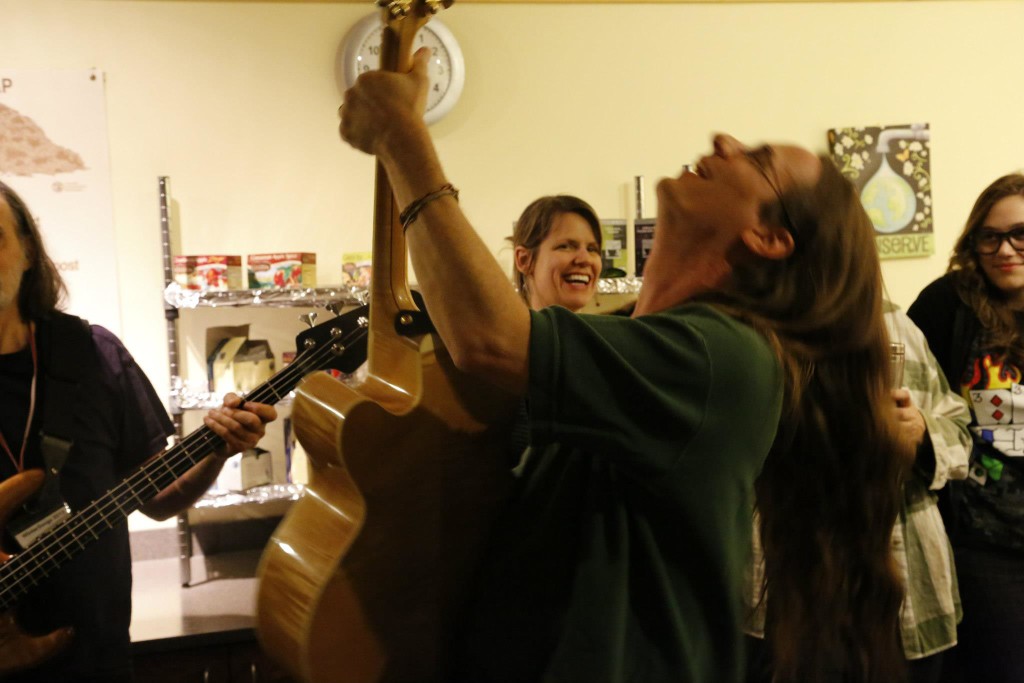 Most of what I know of music I earned by learning to play great songs that I heard on the radio. It was a mostly solitary effort until I got a car – and the songs had drums, rhythm guitar, lead guitar, keys, vocals, harmonies – so I did my best to incorporate as much of the arrangements as I could, by myself. I really love these songs, and I don’t even try to “make them my own.” I think they are perfect the way they were created, and everyone knows them that way!

So what do I love about it? Everything. I love that we all get to sing and play and dance together. I ask each person to contribute by suggesting and leading a favorite song. I shout out chords and lyrics (Seeger style) and it thrills me to see folks learning new songs on the fly! We just let loose our love and excitement over the music that inspired each of us to this joyful life of creativity and expression.